My involvement with Stargazer Lottie, and the fact that she's gone to space with Tim Peake, has made me really curious about other toys which have flown to space. 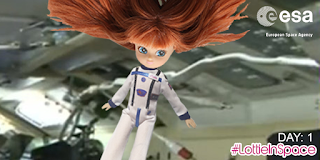 It's amazing what you can find with a bit of digging on Wikipedia and beyond...

In 1985 there was a Space Shuttle Mission (STS-51-D) which among many other things, flew an experiment called "Toys in Space". The idea was to create an accessible way for children to learn about microgravity, by comparing how the toys acted in space, to how they would behave in their own classroom. According to the NASA Website about Toys in Space, this experiment was repeated on the shuttle in 1993 and 1998 (on STS-54 and STS-77 respectively), while in 2002, Expedition 5 to the International Space Station, also took back some of the same toys.

There are a series of videos available showing the toys being used in space, which you can watch below.


The toys included commonly available toys, such as a spinning top, yo-yo, skipping rope (or jump rope), marbles and a football (soccer ball), as well as some toys which could be build by children (an origami flipper, simple card boomerang). NASA also created a set of resources for suggestions of how to use the videos to complement classroom experiments with the same toys. There's even a book about the experiments (and other playful activities in space).

Fast forward to 2008, and the Toy Story action figure, Buzz Lightyear flew into space on Shuttle mission STS as part of an educational collaboration between Disney and NASA. Again NASA created a set of activities and videos for children to use the behaviour of Buzz Lightyear in space to learn about microgravity.

You can see some of the videos of Buzz Lightyear's Mission Log (which are also available to buy on DVD) on Youtube, including the one below.

Meanwhile, sending toys to the edge of space (usually using modified weather balloons) has become quite a thing as a quick Google will show you.

This story of a dad sending his son's toy train to the edge of space gets a lot of hits.


I also like this story, of two little girls from Seattle who sent a picture of their cat and a lego R2D2 figure to the edge of space.


Hello Kitty has been to the edge of space, as has a Lego Space Shuttle, along with lots of other odd things. 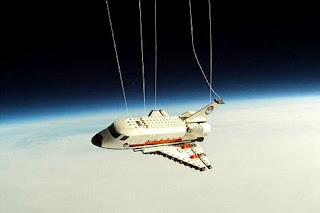 This is all very cool (especially that you can do it for yourself with a bit of effort), but orbiting is much more challenging.

Of course astronauts get to take some small items of their own choice into space. It should be no surprise that the first Danish astronaut took Lego figures with him to space (just back in September 2015). These specially designed Lego figures were then to be used as prizes in a competion for Danish school children after he returned from his 10 day mission.

For more Lego fun in space, Japanese astronaut Satoshi Furukawa made a model lego ISS on board the ISS in 2012. He then used this in a series of videos for Japanese children.

And in 2013, astronaut Karen Nyberg made a toy dinosaur onboard the ISS. She found materials on board to make the toy which she gave to her son on her return home. 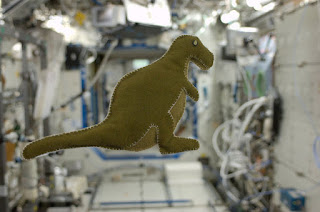 There's been loads of space related Barbie Dolls over the years, but I can find no evidence any of them have actually flown into space... so I think Lottie might actually be safe with her claim to be the first doll in space.

(I'm not the only one to have this idea, you can read this Gizmodo article "25 Famous Toys we Blasted into Space" from 2013 - and they got most of the same ones as me!).
Posted by Karen Masters at 4:49 PM

View my complete profile
I'm a Professor of Astronomy and Physics at Haverford College USA.
This is place for me to collect and/or write articles mostly about astronomy.
As Project Scientist for Galaxy Zoo, I blog about galaxies and other stuff on the Galaxy Zoo Blog, and I'm also the Spokesperson for the Sloan Digital Sky Surveys (which means I write for the SDSS blog).
You can also visit my website; and follow me on Twitter @KarenLMasters