A couple of weeks ago I participated (remotely) in the Royal Society Wiki-a-thon to improve the visibility of women scientists on wikipedia.

One of the articles I started because of this event was about Isis Pogson, a British astronomer who worked for many years as an assistant to her astronomer father at the Madras Observatory in India. Of all the articles I created this is the one which has changed the most since - I guess one sign of success on Wikipedia.

And this article was nominated as a "Did you know" entry by Gonobobo a couple of weeks ago, and ended up on the Wikipedia main page yesterday with the text: 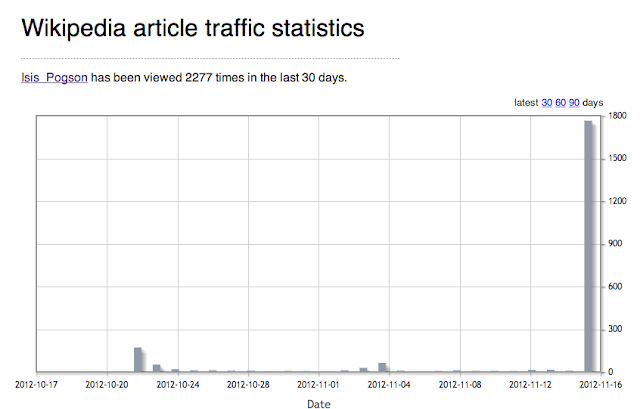 I think that has to count as a success for the Royal Society Wiki-a-thon. :)

Email ThisBlogThis!Share to TwitterShare to FacebookShare to Pinterest
Labels: wikipedia, women in astronomy, women in science

One of the themes of #solo12impact was that the first step in understanding the impact that your online or social media engagement has, is to track your number of followers and other simple metrics of engagement (retweets etc). I would argue the sooner you start tracking the better, as you can observe trends, and you never know what will happen to change your online presence.

I found this session really interesting to introduce me to a bunch of Twitter tracking tools. I've experimented with a few before. I'm just going to mention all the ones I know about in this post.

One I've used for a while now is "Twitter Counter". The free version of this tracks the number of tweets you make and the number of followers you have. You have to upgrade (pay) to export this, or see mentions/retweets, or to track back longer than 6 months. One thing I like is the ability to plot trends over long periods, and plot both number of tweets and number of followers on the same graph. I see interesting patterns in that. For example this screen shot from Jan-April 2012 shows the rise in followers I got from tweeting at the UK National Astronomy meeting in early April 2012, and also a boost from tweeting a lot during Stargazing LIVE (Jan 2012). My theory that your number of followers is proportional to the amount of time you've been tweeting is also based on these graphs, which seem to me to have rather constant gradient over long periods... at least for my account.

My conclusion from this is that number of followers isn't everything when it comes to your Twitter impact - but that's probably fairly obvious. However I do think tracking these trends is a good idea.

Another one I stumbled on that I kind of like is Favstar.fm which tries to work out what are your best performing tweets. I find that sort of interesting - seems to be based just on number of retweets and "favourites". Some interesting results for me. 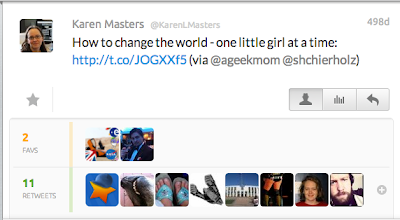 I've also tried out Klout, mentions of which (from others) received at best mixed reaction in the room during this session. True - it's a bit over simplistic, but it's probably also the most recognisable of the results (beyond number of followers) - it's tagline has turned into "The standard for influence". However, I opted out of Klout a little while ago after reading this article sent to me by @eddedmondson: "Evil Social Networks". If you sign up, you also sign up all of your followers (without their permission). Lots of people disagree with their results too. To opt out of Klout you can visit this link. Peerindex was mentioned as similar to Klout, and doesn't have the same opposition (at least that I can find online), so may be a better option if you want a single number. I'm signing up for this as a write.

Probably the big winner of a recommendation from this session was CrowdBooster. I joined this service yesterday following the session and I've been impressed so far. It seems to do both the tracking of raw numbers, and the analysis of the most popular of your tweets in one location. I like the first plot showing the reach of tweets (basically the total number of followers of everyone who might have read your tweet based on who retweeted it). The statistics on influential followers and who retweets you the most also look useful. 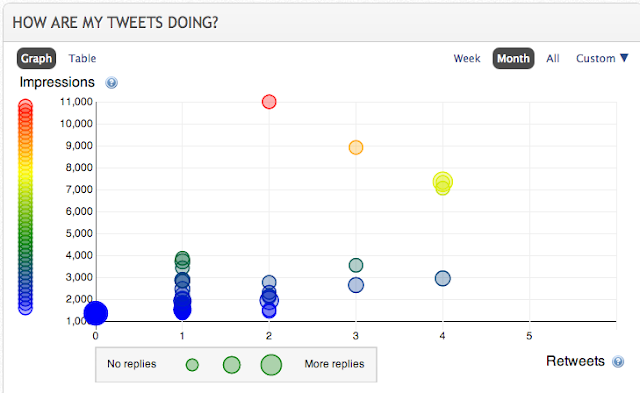 The insights into the best time to tweet also look interesting. Seems I must have a lot of US followers - not much of a surprise given I worked in the US for some time, but I didn't join twitter until after I moved back to the UK.... It's a bit annoying that my best time to Tweet is when I find it hardest to do so (7pm - during dinner time with the kids), but then maybe that's not a coincidence. I probably only tweet really important things then.....

The other shout out went to TwentyFeet.com as an alternative or complement to CrowdBooster. The downside of this being it auto tweets your results (which can annoy followers). I'm signing up for this as I write!

SocialBro.com also got a (twitter) mention. This is a paid service (with a 15 day free trial). It may well be true that you get what you pay for, but I haven't tried this one yet.

I suspect the answer at the moment as to which we should all be using is that there isn't a single best answer and that it will change with time. However it also seems to me that you need a baseline for anything to be any much use, so signing up to at least something (or all?) of these now may be a good idea.

I spent yesterday at SpotOn (Formerly Science Online) London. My justification for going was to learn more about tracking the impact of online public engagement. I had a really interesting day, and came away with a bunch of ideas.

The sessions I attended were:

Using Twitter for Science Communication (which turned into a workshop on the idea of using Twitter characters to improve engagement). Storify of this session. #solo12twitter

Using Social Media at Conferences and Other Events. Storify of this session.  #solo12

Tracking the Impact of your Online Presence. Blog post taster. #solo12impact. I'm going to blog some thoughts from this session next.

And How to Evaluate your Online Engagement. #solo12eval
Posted by Karen Masters at 1:41 PM No comments:

Talking Black Holes and Galaxies on the Today Show

The interview I recorded with Tom Fielden from the BBC R4 Today show aired at 11:46 UK time, Saturday, 10 November 2012 . Tom also did a nice write up of it for the website: article "Gas Guzzler"

You can listen to the show in which this appears for another 4 days at this link: Today Show 10th November 2012.

I recorded the segment and posted in on Audioboo as well.


listen to ‘Talking about the Black Hole at the Centre of Our Galaxy on Radio 4 Today Show’ on Audioboo
Posted by Karen Masters at 10:12 AM No comments:

I'm a Professor of Astronomy and Physics at Haverford College USA.
This is place for me to collect and/or write articles mostly about astronomy.
As Project Scientist for Galaxy Zoo, I blog about galaxies and other stuff on the Galaxy Zoo Blog, and I'm also the Spokesperson for the Sloan Digital Sky Surveys (which means I write for the SDSS blog).
You can also visit my website; and follow me on Twitter @KarenLMasters